A combination of housing solutions were provided, to include single storey houses and two storey apartment blocks with shared amenities, but they have deteriorated badly over the years despite refurbishing attempts.

Housing solutions were expanded afterwards by HAJ to include a scheme of 100 single family units to the south-east of the town wall. This was completed in two phases, with 55 units completed in the first phase and an additional 45 in the second phase. A third expansion was planned to include another 40 units, however it was abandoned due to the site’s vulnerability to high storm surges and corresponding risks. The current status is unclear. However developable sites for expansion continue to be limited due to the natural constraints of the environment.

Currently, nearly one third of the population live in inadequate housing facilities. This is compounded by lack of inadequate infrastructure and services, out-dated governance structures and environmental issues.

Many if not all of the housing units within the town wall were in response to the widespread devastation resulting from 1951 hurricane Charlie. It was evident from as early as the 1987 proposals of the need to upgrade these dwellings, with further suggestions of additional dwellings on the upper level of some of the historic sites such as Lime Street as well as incorporating guest houses or bed and breakfast among the existing housing stock.

The four main housing types in the town of Port Royal are single-storey detached houses, single-storey one-roomed terrace houses, single-storey two-roomed terrace houses and one-roomed apartments contained in two-storey blocks. The rental apartments unfortunately show signs of deterioration, poor maintenance, overcrowding with some amount of squatting is taking place and a high percentage of tenants tardy on their rental commitments to the Port Royal Brotherhood. The 1993 report commissioned by the UDC concluded, “the upgrading of existing housing and provision of new units would be done on a phased basis”. One unit, which had been upgraded by UDC, termed Il de France, is in a similar state of disrepair.

Port Royal is fed potable water by the National Water Commission (NWC) through the Long Mountain/Rennock Lodge deep water well. The water is fed through 8 and 10 inch waterlines that run along the Palisadoes Spit. An infrastructure assessment will be required to ensure the consistency of the supply and quality to meet the redevelopment efforts.

Each apartment block has its own septic tank & soak- away system; the attached terrace houses in the town have a ratio of 2 units per sewerage disposal system. The HAJ housing scheme beyond the town wall, have an on-site system for each home. The original intent was to connect to a central sewage system but the cost to do so and maintenance of the system became a prohibitive issue for the residents.

The NWC has indicated that any future development in Port Royal would have to make provisions for sewage treatment as it was unfeasible at this time to connect into any of its centralized systems. The sewerage requirements for the town will be subjected to further assessment to determine the best system to be employed that will allow for the sustainable treatment of sewerage.

The streets of Port Royal are narrow, with an average vehicular carriageway of 6 metres. The narrowest is Dockyard Lane (.35 metres) which is adjacent to the Naval Dockyard. There are also signs of deterioration in the road surfaces. The roadway reservation often includes storm water drains in a combination of open and covered drainage systems, most of repairing and maintenance. It was noted that some of the damage was due to residents themselves attempting to clean drains before storm events.

The storm water drainage system is made up of a network of open drains and a system of non-return flaps prevents sea water from flooding the town during storms or high tide. Wastewater flows from open channels in the housing yards to channels under the sidewalks. They lead to larger drains at either side of the town then to the harbour but are often blocked.

Solid waste collection by the (National Solid Waste Management Authority/NSWMA) is irregular. This has proved to be a health hazard as it facilitates rat infestation. Special attention will also be required to the garbage that chokes the dense mangrove root structures. Mangrove removal and reclamation are issues to be addressed.

Each unit is metered and electrified individually.

Currently Port Royal is accessed either by car via Norman Manley Highway from Downtown Kingston which is roughly 16 miles or a 30 minute drive; or via public transit (JUTC) which takes between 45-50 minutes from Parade, including a stop at the Norman Manley International Airport.

Currently, parking is unregulated. Spaces dedicated to residents as opposed to visitors are not clearly marked and demarcated. Vehicles occupy areas close to their destinations. There is a very real danger that with development, the small town could become overwhelmed with cars.

For the most part, the existing attractions and sites are located within walking distance of each other, specifically, within a 400m or ¼-mile radius. Even proposed attractions generally fall within the realm of walkability. The biggest drawback to fully taking advantage of this opportunity is the hot, dry conditions of the current pedestrian environment.

Port Royal by nature has a climatic regime of extensive sunny periods, low rainfall and exposure to wind, making the exposed sidewalks and walkways uncomfortable while walking. Thus, a streetscape and landscaping strategy will become extremely important if the sites are to significantly benefit from visits.

The impacts of climate change on heritage sites and the advent of an older travelling population will be incorporated in an overall strategy to address expected increased dryness and heat, which can be attributed to a changing climate. Additionally, Port Royal will require a transportation mobility plan to address the issues highlighted above. 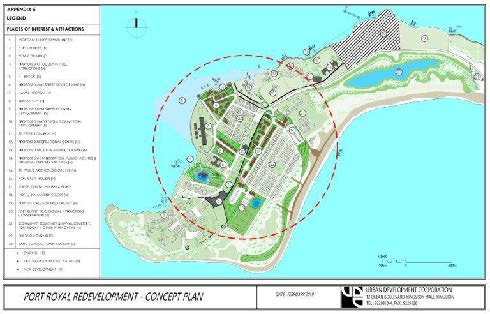 A large percentage of the area in Port Royal is currently occupied by heritage activities and mangrove forest. The town as was stated earlier is dominated by residential activities.

A large percentage of the area in Port Royal is currently occupied by heritage activities and mangrove forest. The town as was stated earlier is dominated by residential activities. The UDC proposed land use and NEPA’s Port Royal Local Planning Area Proposed Zoning proposal will guide the development of Port Royal going forward. 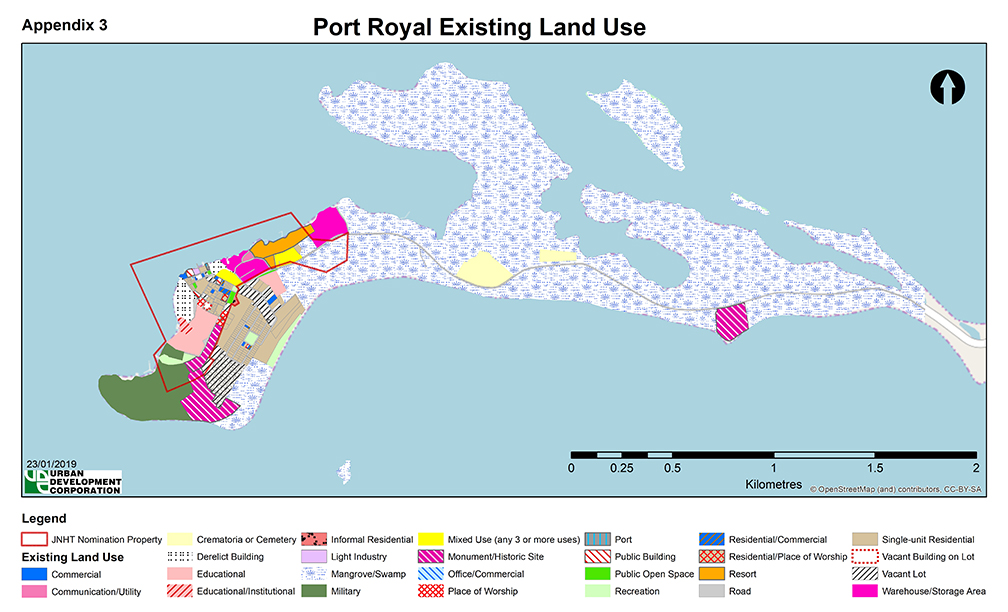 Port Royal has a long and varied history that can be traced to the late 17th century and since 1964, the town has been targeted for major redevelopment. During this period, a number of Plans were created to guide the town’s redevelopment. The latest Plan that was completed for Port Royal in 2009, was entitled “Port Royal Heritage Centre – Development Proposals for Priority Areas for Tourism, Education, Research & Upgrading”.

It is anticipated that this current Plan will guide the evolution of the town into an urban space that exudes inclusivity, with the basic characteristics and established institutions to ensure good governance, management and maintenance of a healthy natural environment.

As the world grapples with rapid urban growth and change in users and visitors, historic towns like Port Royal due to the globalization of tourism represents a familiarity that is linked to an ‘idealized’ past in a globalized market of ever-increasing sameness. This can result in tension, between local culture as it is lived and local culture as it is being marketed and perceived by outsiders/visitors.

It is also noted that physical relics of history, including buildings, are ‘owned’ however, the historic town as an entity is not, but represents ownership to the local community and residents through attachment and belonging. Therefore, during the implementation of the redevelopment strategies of this Plan, the stakeholders will be encouraged to respect and empower the approximately
1,300 residents to improve their way of life, while offering opportunities for employment, sustainable economic growth and an improved quality of life. The development of the floating pier system/Sea Walk by the Port Authority of Jamaica, will result in an increase in the number of persons (tourists and locals) that uses the historic town.

To ensure that the cultural and physical heritage and environmental resources within the town is protected and enhanced, all activities will be guided by strategies to be fully outlined in the accompanying town management plan that will be created for the town, to ensure it functions in a sustainable manner. These strategies will be grounded in principles ninety-nine (99) through to one hundred and one (101), as is stated in the Urban Agenda. The other ratified international and local sustainable development guidelines will also be used in the formulation of the strategies.